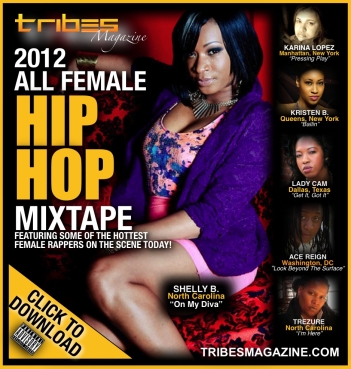 GET ONE OF THE HOTTEST MIXTAPES OF 2012!

Where are all the really dope female emcees? was the sparking question that ignited this Spring 2012 edition of TRIBES Magazine. While it became apparent immediately that some purveyors of pop music and commercial hip hop may want us to believe that there aren’t many worthwhile women out there rapping today, make no mistake! Women have not fled the Hip Hop game. They are out there rapping for their lives and, if the eager response to TRIBES Magazine’s search for the most talented female rappers on the indie scene is any indication, they are steady on the grind and very much a part of Hip Hop’s future. Nearly two-dozen artist submissions and fifty tracks later, TRIBES has compiled a Top 5 from the nominations. From shoe fetishes to paper stacking, loving their children to sexing their men, being independent and maintaining their faith in a higher power, these women rap about life, their dreams and the communities that gave rhythm to their flows and taught them about love.  Not marginalized figures or victims raging against the power machine, these ladies are perfectly confident in their right to rap and cleat about their place in a seat at the Hip Hop table. Step outside of the mainstream box and meet 5 Female Emcees beating the heart of Hip Hop from the underground. Featuring the hot new single, “On My Diva” by NC’s Queen of Hip Hop, SHELLY B.,; KRISTEN B. and KARINA LOPEZ bring the New York flavor; southern raps’ LADY CAM from Texas, ACE REIGN representing Chocolate City, and Greensboro’s own TREZURE are also featured! DOWNLOAD FREE!