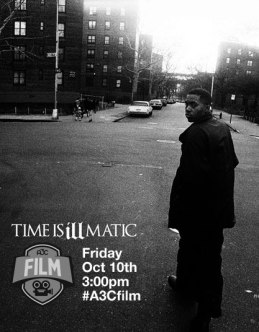 Nas: Time is Illmatic at A3C

A3C is proud to present a screening of the documentary Nas: Time is Illmatic followed by a Q & A with the filmmakers. The film covers the making of Nas’ 1994 album Illmatic, often hailed as the greatest hip-hop album of all times, and the timeless themes that have kept both the album and Nas relevant for so many years.

After the film screening, we’ll be joined by director One9, writer Erik Parker, and producer Martha Diaz for a discussion about the making of the film, the inspirations behind it, and on the scope and influence of Nas’ Illmatic.